RENA VANKIRK grew up in Hartford, Ohio, a small farming town outside of Youngstown. She took ballroom dancing and sold franchises for Fred Astaire Dance Studios for 14 years until she made the decision to move to Santa Barbara with her daughter Naomi in 2006. After several years working with Montecito Bank & Trust, she took a position at the Carpinteria Branch and immersed herself in volunteerism.

While Rena had always volunteered in the beer booths at Avofest, in 2015 she was asked to join the Carpinteria’s 50th Birthday Celebration Committee and, as the party was collaborated with the Avocado Festival, she was able to get behind the scenes and see what Avofest is all about. In 2016, Rena was hired as the Festival’s Administrative Director.

"I especially love working for the Avofest because I get to help plan a party for 100,000 of my closest friends,” said Rena.  “All joking aside, it brings me so much pleasure working for a non-profit that helps other non-profits. It’s a win-win for all involved!”

Meet the Board Members

GARY DOBBINS, Board President, joined the Avocado Festival as a volunteer in 1989 and has served on the festival’s executive board since 2001 (President 2008, 2016). Gary was born in Illinois and raised in Kentucky and Indiana. After graduating from high school in Indianapolis in 1969, Gary joined the Army and served as an E-5 until 1972. He was stationed in Germany and Vietnam and was awarded numerous commendations, including two bronze stars, for his service. Gary also owned a record label and publishing company. Gary moved to Carpinteria in 1989. In 1994, Gary co-founded the Coastal View News, a weekly newspaper. In addition to publishing the newspaper, he co-founded Carpinteria Magazine in 2001. Gary has been a member of Rotary since 1994, and served as president of the Rotary Club of Carpinteria in 2005-06. In 1997, Gary co-founded Rods & Roses, an annual classic car show and independence parade in Carpinteria. Gary also served on the board of directors of the Carpinteria Sanitary District from 1990 to 1995; the board of directors of the Boys & Girls Club of Carpinteria, Girls Inc. of Carpinteria, HELP, and the Host Program. From 1994 to 1998, Gary produced a weekly television show called Carp Live with Mark King. Gary’s wife Dianne passed away in 2003. They have two daughters and two grandchildren.

ANNETTE FISHER joined the Board of Directors in 2019 and has been the Merchandise Chair for the California Avocado Festival for the past six years. She has been married to her best friend Dan Fisher for 10 years. Both Annette and Dan champion, love, support, and volunteer whenever and where every they can in the community. When Annette’s not volunteering or working as a billing coordinator for Jackson Medical Group, she loves spending time with her three children and seven grandchildren.

MIKE LAZARO has been on the Board of Directors for the California Avocado Festival for 32 years, 28 of those years in the role of the Director of Operations and Director of Entertainment. He is also on the Carpinteria Plaza Theater Board of Directors. He has been an ongoing consultant to various events around the country. Mike Lazaro has specialized in total event management; He has worked in some of the world’s largest convention centers with some of the largest Company conferences and sporting events including Indy Races and Super bowls. He has also participated in ongoing event support for Santa Barbara Earth Day celebration, SB Summer Solstice, Old Spanish Days Fiesta and Citrus Classic Balloon Fest, Carpinteria Annual Triathlon, and Carpinteria’s Rods and Roses Festival. His most recent accomplishments include the participating in the organization of the 2013 Opening Day Ceremonies at the San Diego Padres Petco Park.

RICHARD H. TINKSTROM “Tinker” grew up in Oxnard and moved to Santa Barbara in the early ‘60’s where he worked for a welding company.  In 1969 Tinker moved on to work at Union Oil for 18 years. Tinker served on the Summerland Sanitary Board for 8 years. He opened Tinker’s Burgers on 12/27/1987 and opened both Summerland Catering and Tink’s All American Hot Dogs 15 years ago.  In addition, to having a booth at the Avocado Festival, Tinker also has had booths at the Kite Festival, Old Spanish Days and the Lemon Festival.

A brainstorming meeting was called to create an ongoing weekend event that would benefit the fundraising efforts of the local non-profit groups. It seemed the plan would also help promote Carpinteria as a Southern California weekend getaway destination and boost our local economy. 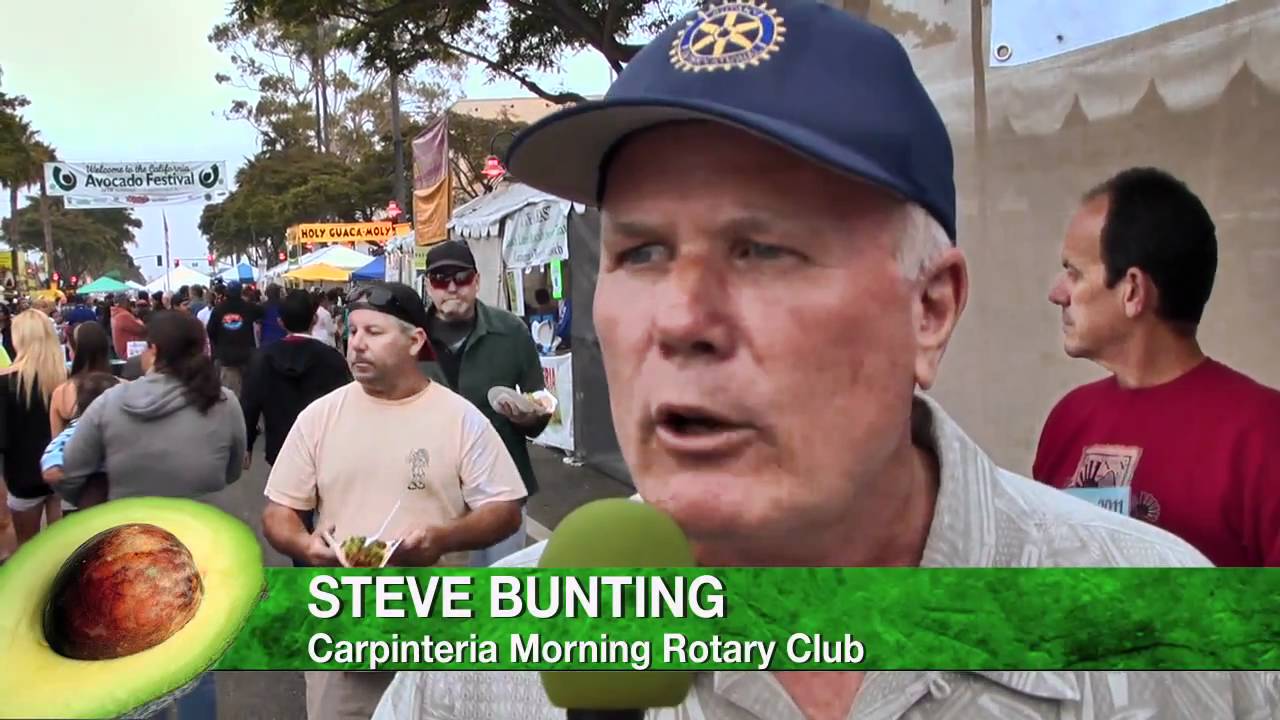 The largest FREE street festival in the state occurred in early Oct, 2010 in the wonderful beachside community of Carpinteria. Discover what the buzz is all about!

Well, Santa Barbara County is the third largest avocado producer in North America, with Carpinteria being a major contributor. It seemed like a natural food festival in the making. Why have the Festival the first weekend in October? Oddly enough, statistics show that October is one of the sunniest months of the year with the least amount of rainfall.

And there it began...the California Avocado Festival®.

The festival has evolved into one of the largest in California with three days of fabulous food, terrific music, and great safe family fun. It is one of only a few community festivals still operated in the heart of downtown.

As the Festival grows, so do the number of participants and festival-goers. This year over forty non-profit groups will benefit by catering to 100,000 avocado visitors. The California Avocado Festival™ itself is a non-profit group that generates its own operating revenue each year. The annual event is completely organized by a committee of volunteers, and includes one part-time staff person.

Thanks for joining us this year and celebrate our famous green fruit and the California Avocado Festival™.

THE HISTORY OF AVOCADOS
The California avocado is a native American plant with a long, distinguished history. Today, the most popular variety is the Hass. The mother tree of all Hass avocados was born in a backyard in La Habra Heights, California.

The avocado (Persea americana) originated in south-central Mexico, sometime between 7,000 and 5,000 B.C. But it was several millennia before this wild variety was cultivated. Archaeologists in Peru have found domesticated avocado seeds buried with Incan mummies dating back to 750 B.C. and there is evidence that avocados were cultivated in Mexico as early as 500 B.C.

FROM AQUACATE TO AVOCADO
Spanish conquistadores loved the fruit but couldn't pronounce it and changed the Aztec word to a more manageable aguacate, which eventually became avocado in English. The first English-language mention of avocado was by Sir Henry Sloane in 1696.

CALIFORNIA'S CASH CROP
Fast forward to 1871, when Judge R.B. Ord of Santa Barbara successfully introduced avocados to the U.S. with trees from Mexico. By the early 1900s, growers were seeing the avocado's commercial potential and ever since growers, enthusiasts and researchers have been hunting for improved varieties. A search through the industry's foremost annals, in particular the California Avocado Society Yearbook, reveals that many new selections of avocado were made in the industry's infancy and over subsequent years but few had commercial significance. By the 1950's around 25 different varieties of avocados were being commercially packed and shipped in California, with 'Fuerte' accounting for more than two-thirds of the production. Even though 'Hass' was discovered in the early 1930's and patented by Rudolph Hass in 1935, it was not until large-scale industry expansion occurred in the late 1970s that 'Hass' replaced 'Fuerte' as the leading California variety.
Today, California is the leading producer of domestic avocados and home to about 90% of the nation's crop. Most California avocados are harvested on 60,000 acres between San Luis Obispo and the Mexican border, by about 6,800 growers. San Diego County, which produces 60% of all California avocados, is the acknowledged avocado capital of the nation.

California avocados are grown year-round. A single California avocado tree can produce up to 200 pounds of fresh fruit each year, approximately 500 pieces, although most average around 60 pounds or 150 pieces of fruit.

About the California Avocado Festival ®

The California Avocado Festival Board of Directors would like to thank all who support AVOFEST™! Your support through sponsorship, volunteering, visiting or just coming to enjoy the delicious avocados is the force behind our efforts.

We are a 501c3 created to help support other service organizations, so thank you to everyone for your continued enjoyment of the California Avocado Festival!

Our 33rd ANNUAL CALIFORNIA AVOCADO FESTIVAL was so successful that it surpassed many of our previous accomplishments! In prior years, we have had over 75,000 visitors over the course of the three-day weekend.  This year, it was over 80,000!!!

Our participating Non-Profits and Service Organizations were able to generate over  $100,000 worth of funds that went back to the community through their initiatives.

Our free doggie day care had over 100 dogs kept happy, cool, and entertained while their owners enjoyed the festival! And once again, we were able to reach our goal of Zero Waste! With special thanks to E. J. Harrison.

CELEBRATE THE AVOCADO!
We are one of the largest FREE festivals in California with over 80 music acts on FOUR stages.  Check out our “Entertainment” tab for more info and line-up updates! You can also find them on our Facebook Page in late August.

Come celebrate the importance of the avocado to the Carpinteria Valley by visiting the Expo Tent! The AvoEXPO TENT is home to Avocado agricultural photos, historical photos, lessons in avocado grafting, FFA restored antique tractors, and the Largest Avocado Contest.

Our FOOD VENUE, that has plenty of avocado dishes, can be found on the 800 Block of Linden.  Come hungry, and enjoy some avocado creations!!!